Inspired by this post in the Strobist discussion group by Moyen Format, I tried making my own ring flash from a piece of flexible ducting - Picked up the ducting from Screwfix (Item number 17297) and also picked up a connector that's meant to be used to link the tubular ducting to rectangular duct (Item number 12049). (click thru for bigger pics on Flickr) 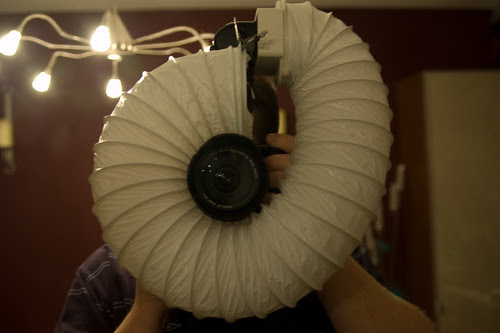 It's as simple (and ridiculous!) as it looks - length of ducting, with a flash stuck in the end. I've added a CD in the other end as a reflector to try to even the light out a little. 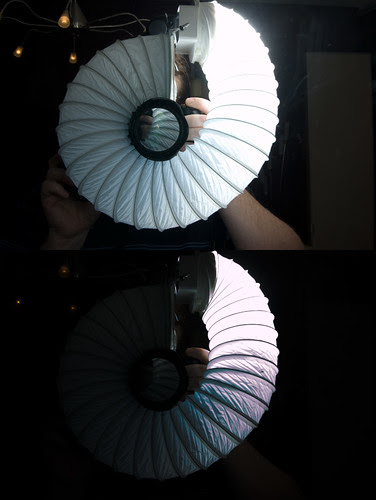 And here it is 'in action' - the bottom half of the frame is the same image, but with the exposure dropped -4 stops in ACR to show the hot spots a little better. You can see how uneven the light is, with 12 o clock to about 4 o clock being lit, but a lot of falloff after that 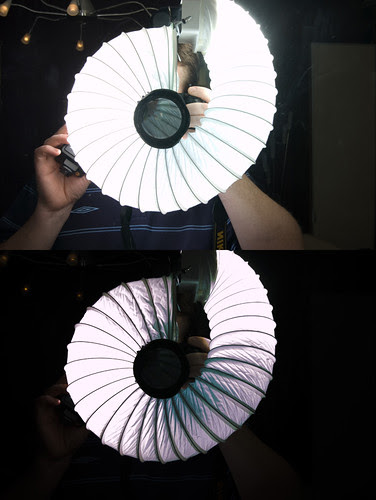 On this shot, I added a second (hand held) slave flash - you can see that this even things up a lot (same idea as above - bottom half is dropped 4 stops in ACR). This looked pretty good, so I thought I'd see out some willing 'models'... Cue Eeyore and Elmo: 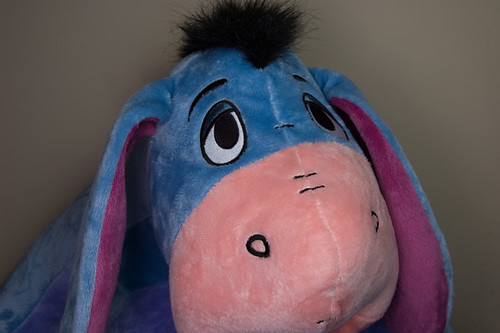 Eeyore looks OK - very 'flat' lighting, but he doesn't have any reflective eyes (aaw, poor Eeyore!) so you can't see the trademark ring catch light, and he's quite a big guy, and was a fair distance off the wall, so you can't really see the ring shadow/halo against the wall... 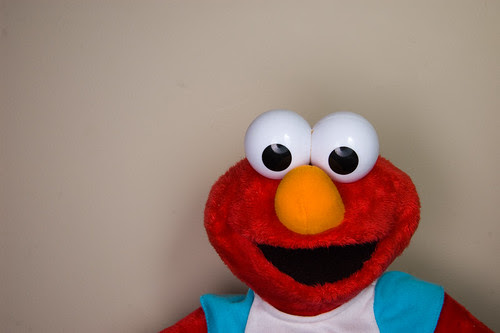 Elmo, however, is lucky enough to have real (plastic) eyes, and looks a lot better with the ringlight - you can see in the catchlight that the light still isn't even, but it's a lot better. Still need to try to mask off some of the ring around the flashes to try and even things out, and maybe figure a way to mount the 2nd flash (or better, get the reflection working well enough that the 2nd flash isn't needed)

That's gonna be tomorrows problem... or next weeks. Sometime.
Posted by Unknown at 21:08