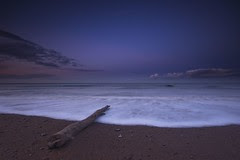 , a fancy photo sharing thing.
Posted by Unknown at 14:23 No comments:

After sucessfully bodging together a couple of Strobist inspired flash modifiers, and having now found my off camera cord, I thought I'd make a couple of test shots to see the effect on a real world glamour model in exotic surroundings.

Or, more realistically, a picture of one of my daughters toys on my coffee table. Glamour models and exotic locations to follow when Camelot call with my winning numbers.

First shot, the 'model' with bare, off camera light (Click thru for a larger version of each pic).

Puppy is nicely exposed, but there is a lot of uncontrolled spill on the background.

So next, with my Pringles snoot:

Much tighter, but still a little spill. This is probably useful for many shots where I need to focus on a subject without completely excluding all background, but I was hoping for a tighter, more controlled light... enter the Grid:

This is much better - light where I wanted it, but not where I didn't.

And just for balance, here's a shot that's not gridded - this one's taken with a diy 'beauty dish'. It's dark - very dark, as the dish eats flash power, but I kept exposure constant throughout as I wanted to see how the light was changed. Ignoring the poor exposure, the actual light is pretty good - even and softer than the bare flash:

I think we need a little more work on this one, but it's showing potential. More to follow when I have some spare time to fiddle... which hopefully will be soon, when my Wireless triggers, umbrellas and stands arrive....
Posted by Unknown at 21:45 No comments:

After reading strobist.com (a fantastic source of info/inspiration for all things to do with off-camera flash), I was inspired to create some light modifiers.

The easiest to create are snoots/grids, so that's what I did. By a lucky coincidence, the easiest framework in which to create these bits of kit happen to be empty pringles tubes, so for the sake of research, I found myself having to consume two tubes. :-)

A full size tube was used as a Snoot, and a small tube, with the addition of some black drinking straws, for a Grid.

So, first have a look at a reference image (i.e. a pic of my wall) with the bare flash, with apologies for commiting the sin of using the flash on the hotshoe...

Nothing very interesting about it, but it shows the wide coverage of the flash without modifiers.

Next, the same shot, but with the Snoot added:

Notice the much tighter light pattern - the exposure of the candle is unchanged (and thankfully, has picked up no colour cast, as far as I can see). This is all about controlling spill onto the background.

Finally - with the Grid:

This is a FAR tighter beam, with far more defined edges and no spill. This was shot from about 6 feet from the wall (the candle stick is about 12" from top to bottom, so the beam is pretty much 1 foot @ 6 feet distance).

Great stuff - now if I could only find the off camera cord, I could try this without the horrid shadows....
Posted by Unknown at 21:27 No comments:

Well, the big day is here... after some very last minute panics, we made it to my first exhibition. It's been a bit disappointing to be honest. Made a few sales, including a 'dedication' to someone's mother, and had some good comments & chatted to some people about photography and cameras, but all in all it's been very quiet. Maybe it will pick up soon...

Edit: yes it has! I've had some interesting chats with some people, from the inevitable 'how many megapixels' to a guy who shoots with a leica 35mm and does his own developing. It's been an interesting day so far. First stop, Thornton Dale, next stop the Tate modern!
Posted by Unknown at 13:15 No comments:

Email ThisBlogThis!Share to TwitterShare to FacebookShare to Pinterest
Labels: test

Well, worrying as it may be, my first public exhibition is now less than 2 weeks away... yes, it's a small, local event, and I don't think it's an event that will make or break my career, but the nerves have kicked in.

If you're in the North Yorkshire area on Sat 16th August, and you're passing Thornton-Le-Dale, pop in to the Hill Institute on Maltongate and say 'Hello'.
Posted by Unknown at 22:00 No comments:

Well, my first post, and I thought I'd make it really interesting. That's what I thought.

Never mind
Posted by Unknown at 09:38 No comments: